Is it Normal to Have Whiplash Pain Months After an Accident? 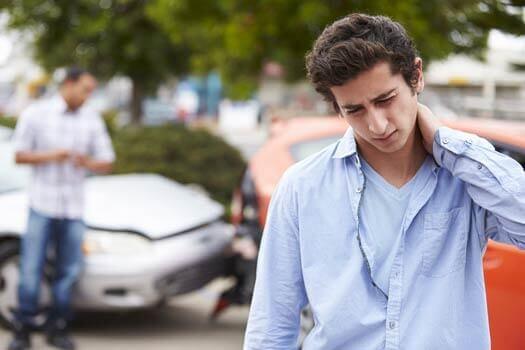 Normally associated with the sudden “whipping” or jolting motions common during car accidents, whiplash can occur during any instance when your neck suddenly moves backward and forward. The intensity of those movements often affects muscles and joints within the cervical spine. While most people experience symptoms within 24 hours, it’s not unusual for pain to be experienced beyond that time period.

Some symptoms of whiplash are more likely to be experienced sooner rather than later. The most immediate affect of whiplash is some type of pain or discomfort in the neck or shoulders. Pain may also travel to your arms or into your upper back, depending on the severity of the jolt. Other symptoms likely to appear within the first 24 hours following whiplash include:

Depending on the point of impact, some whiplash symptoms may appear later when you experience another jarring motion while playing sports, working out or sleeping in a position that places added stress on neck muscles already weakened from the whiplash. Symptoms that may appear beyond the first 24 hours following whiplash include:

Err On the Side of Caution

Unless there’s immediate pain, most people tend to dismiss whiplash as being minor. It’s best to err on the side of caution since early detection increases the odds of successful treatment without any lingering symptoms. If anything, a thorough examination (typically involving x-rays, CT scans, MRIs) following a hard blow or jolt to the neck offers peace of mind. Treatments may include:

• Over-the-counter pain medications (Tylenol, aspirin)
• Wearing of a foam collar (to stabilize the neck during healing)
• Massage therapy (and other alternative therapies like acupuncture)
• Back or neck surgery (if the neck injury resulted in a ruptured or herniated disc or placed pressure on nerves)

Most instances of whiplash are mild to moderate, meaning symptoms are likely to go away after you’ve given muscles and ligaments time to heal. If, however, you have pain and stiffness that returns after going away for a while or you experience new symptoms within a few weeks–or even a month or so–after your whiplash, it’s time to see a doctor to determine the extent of your injury.

If you’re experiencing persistent neck pain long after an accident, you may have ruptured a disc and could be a candidate for spinal fusion or cervical artificial disc surgery. Reach out to The Spine Institute Center in Beverly Hills at (310) 828-7757 and schedule an in-person consultation to learn more.