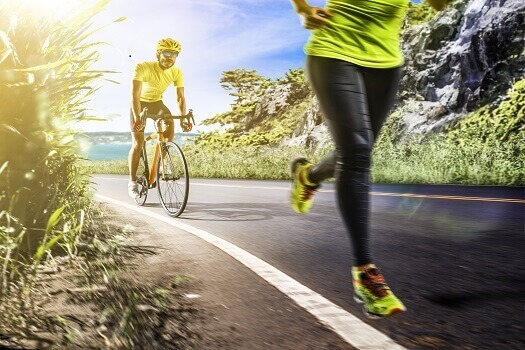 It’s easy to talk about the many potential benefits patients can enjoy with successful spinal fusion surgery, but what’s truly inspiring are some of the real-life success stories of individuals who’ve gone on to accomplish impressive goals after recovering from a spinal fusion procedure. One of these individuals is Rafael Rodriguez. This fitness enthusiast earned a respectable 50th place finish in a triathlon competition that required him to bike, swim, and run his way through 15 miles of winding terrain. Here’s his story.

A History of Spine-Related Pain

For five years, Rafael lived with on-again, off-again lower back pain. His discomfort extended to his hips and upper buttocks. Even with intermittent pain, he continued to maintain an active lifestyle with a little help from ibuprofen, an over-the-counter anti-inflammatory drug. Eventually, his symptoms affected his ability to remain as active as he wanted to be, and he began his search for a long-term solution.

Finding the Source of the Pain

During a visit to a spine surgeon, it was discovered that Rodriguez had three different sources of spine-related pain: a herniated disc, a fractured vertebra, and spondylolisthesis. It may have been the fracture in the vertebra that caused it to slip forward over the one below it, which is what spondylolisthesis is. Rafael’s doctor recommended having two procedures to correct the problem.

Rafael first had a discectomy to remove the damaged disc and relieve the nerve pressure responsible for the pain in his hips and buttocks. He then had an interbody fusion procedure that included the insertion of a titanium implant. During the surgery, the implant was placed between the two affected vertebrae to stabilize his spine.

The surgery was successful for Rodriguez, who was walking after just three days. He then transitioned to light activities. After a few weeks, he was off of his regular pain meds and running for brief periods. Patients who undergo successful spinal fusion surgery are often able to resume their normal activities within 3-6 months of having the operation. It was at this point in his recovery that Rodriguez was back to running 5k races again.

Rodriguez believes other individuals going through similar issues with spine pain should follow the regimen provided by their physical therapist or doctor. His strength and endurance continued to improve post-surgery, so much so that five years after his procedure he was able to place seventh within his age range after completing a challenging triathlon. Rodriguez’s story is proof that it’s possible to return to a happy, productive, and healthy life following spine surgery. Santa Monica residents considering fusion surgery need to have realistic expectations based on their own unique circumstances. For some patients, simply being able to go about daily routines with little or no discomfort post-surgery can make a world of difference with quality of life. At The Spine Institute, we specialize in a wide array of fusion and non-fusion surgeries, whether you need artificial disc replacement or a kyphoplasty procedure. Santa Monica patients who are looking for relief to their chronic spine pain can call 310-828-7757 and schedule an appointment.